Some 96 years ago today, was born a music legend – Pandit Ravi Shankar in India. But his musical influence didn’t just stay in India but impacted the whole world. Google is honoring Pandit Ravi Shankar on his 96th birthday anniversary with a doodle, a creative piece featuring a sitar as the centrepiece.

Shankar lived a successful life though a humble one from the beginning. He was one of the best-known musicians of the 20th century. Because a king never dies and only sleeps, Shankar slept on December 11, 2012, leaving behind a rich legacy. 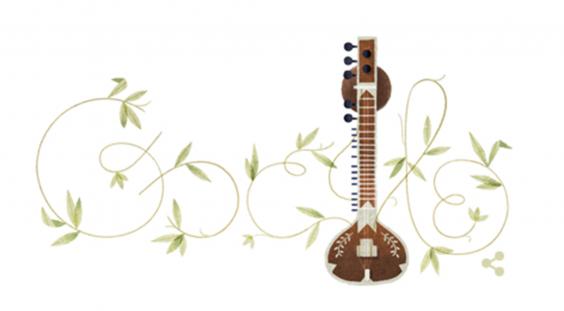 In his life, Shankar collected many honors and awards. He also popularized Indian classical music to the world, getting it to the pop music of the 1960s. His musical work featured a blend of classical Indian music with a western touch, making Shankar a game-change in the international music scene.

Shankar lived a glorious life, bagging the Bharat Ratna, the highest civilian honor in India in 1999.

Starting as a Dancer:

Shankar had humble beginnings, starting out as a dancer in his brother’s dance troupe. He was only 10 when he joined the troupe and started moving around with fellow dancers. Later, at the age of 18, Shankar started his training on sitar, and that marked the beginning of a long and exciting journey that turned him into a highly celebrate Indian musical doyen.

It was Shankar who turned around the famous song “Sare Jahan Se Achha”. The song was written in 1904 by Muhammad Iqbal, but it wasn’t until 1945 that Shankar realized the song needed some improvements to make it a hit. Indeed after working on it, Sare Jahan Se Achha became almost an instant hit. What Shankar did was that he replaced the drawn-out tune of the iconic Sare Jahan Se Achha song with a more vibrant tone that made many people to love it.

Shankar served as a Member of Parliament from 1986 to 1992. He was nominated to parliament by Rajiv Gandhi.