If rumors are to be believed, the entry level variant of Microsoft Surface Phone will be equipped with Snapdragon 830 processor and 4GB RAM. Microsoft is gearing up to release the new smartphone, which is tipped to bring the Redmond-based software giant back to the smartphone segment.

After the huge failure of Lumia series, Microsoft has done a great amount of research to build a new smartphone which will meet the expectations of users. To tackle the acute competition from various manufacturers, Microsoft is planning to go big with the upcoming Surface Phone.

Talking about the hardware segment, the new Microsoft Surface Phone will ship in three RAM variants with 4GB being the entry level. According to rumors, you can expect 6GB and 8GB RAM variants.

It is also being rumored that the default internal storage space of the Microsoft Surface Phone will be equipped with 128GB storage space. If this rumor turns out to be true, it is will be a big game changer since Apple is expected to infuse 32GB as the default storage for the iPhone 7.

There are reports that the 6GB RAM model of Surface Phone will bear a storage capacity of 256GB. If you look at the existing premium smartphones, you will be able to crank up to 256GB storage only using microSD cards.

What we gathered from the rumor mills is that the Microsoft Surface Phone will have a total storage capacity of 512GB for the 8GB RAM edition. This smartphone is oriented for advanced users and developers. 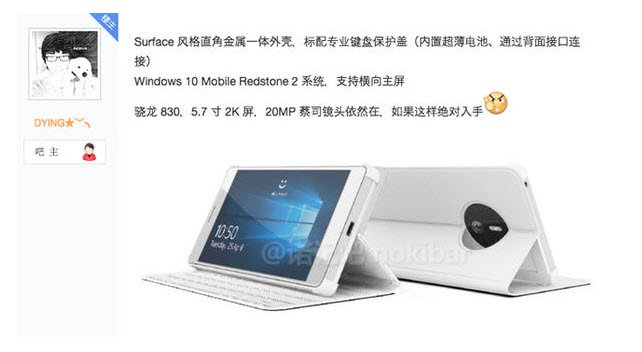 A while back an image leaked which shows that the phone will ship with a Snapdragon 830 processor, 5.7-inch display with 2K resolution. Moreover, the rear camera capacity has been mentioned as 20MP.

Unless other competing manufacturers release smartphones with similar configurations, Microsoft will be the first device maker to offer such a massive specifications even in the budget segment.

To increase processing power, Microsoft is reportedly looking forward to integrating an Intel processor. Earlier, there were reports of Microsoft making use of Atom X3 for the new flagship. However, Microsoft’s plan got a setback when Intel cancelled the production of the processor.

According to sources, Microsoft has already shelved the idea to bundle Intel processor. Instead, the company is planning to make use of the Snapdragon 830 processor for the Surface Phone. There are reports that the new Surface Phone will be equipped with Intel Kaby Lake processor, which will have enhanced performance.

We expect Microsoft to ship Surface Phones with the latest Windows 10 Mobile. The main problem with Microsoft devices is the inability to upgrade the software smoothly.

If Microsoft bundles the Surface Phone with Windows 10 and later on doesn’t ships any updates, then the company will lose its charm among future customers. This is what happened to Zune music player and Lumia smartphones. Microsoft will release Surface Phone by the end of March 2017.