OnePlus came into the Indian market with the strangest of approaches, which later became a flagpole for their success story but, their latest flagship OnePlus 3 has a different story with a projectile end. Though their invite system seemed a bit arrogant and obnoxious in the public eye, their products proved to be quite worthy. Although there is good news for those who still put off by such marketing gimmicks, the company has decided to abandon its invite system.

About a year ago flagship phones under Rs. 30,000 had a lot to offer, and it seemed much, at the time. Perhaps Google Nexus 5 was the best among them all but, now the war of specs is truly on! Described as the “Apple Killer”, OnePlus fights in the lower price league, offering specs that its rivals offer at almost twice the price. Though it is unlikely to topple its Californian rival, OnePlus 3 is living up to the hype.

Nearing as perfect as they get, the device not only looks great but also feels more expensive than Rs. 27,999. Accused of looking similar to the HTC One M series, the sleek device with a sumptuous aluminum alloy gives a better feel resting on your palm with its flatter back and is almost the same weight (158g). The single block of aluminum on the inside that OnePlus talked about doesn’t do much to increase its weight. However, it does what it is meant to: keep it firm and sturdy. With one of the thinnest bezels that I have seen, the flat screen is almost seamlessly integrated with a unibody base.

For those who are not huge fans of plain metal texture and feel, the sandstone cover is just about a few clicks and Rs. 899 away.

The fingerprint sensor sits comfortably at the foot of the 2.5D curved glass along with the backlit capacity touch keys on either side. At 7.3mm thickness, the device is significantly thinner than its predecessor, making it easy to hold, handle and slide into your pocket. The 5.5inch 1080p optic-AMOLED display, coated with the Gorilla Glass 4 looks about right. The glass layer topped by the AMOLED layer and the plastic frame makes sure that it is rigid. That’s right! Even Jon Snow needs his armor. More about it in the next section.

At the bottom is the speaker, the USB port, the primary mic and the 3.5 mm audio jack. The secondary mic sits above the camera at the back. The call speaker on the forehead of the bezel is left-winged by a proximity sensor and the 8MP front camera.

To top it all off, the display sits safely behind the Corning Gorilla Glass 4.

The 5.5-inch 1080p display is not very different from that of OnePlus 2, and it may not be the best in its price league in all categories, it is not entirely unforgivable. The new OTA brings the sRGB mode, which tones down the saturated colors. Besides, the QHD consumes a lot of the battery, and may cause heating issues. Then the durability gets hampered. It’s all relative!

On the other hand, if you’re one of the not-so-finicky ones, wondering “what is all that talk about a ‘natural viewing experience’?”, the custom-engineered gamma corrections create a dual polarizing layer, helping with excellent visibility in the brightest of sunlights (ergo the accusation of overly bright or saturated colors, but as mentioned, the sRGB mode takes care of it). 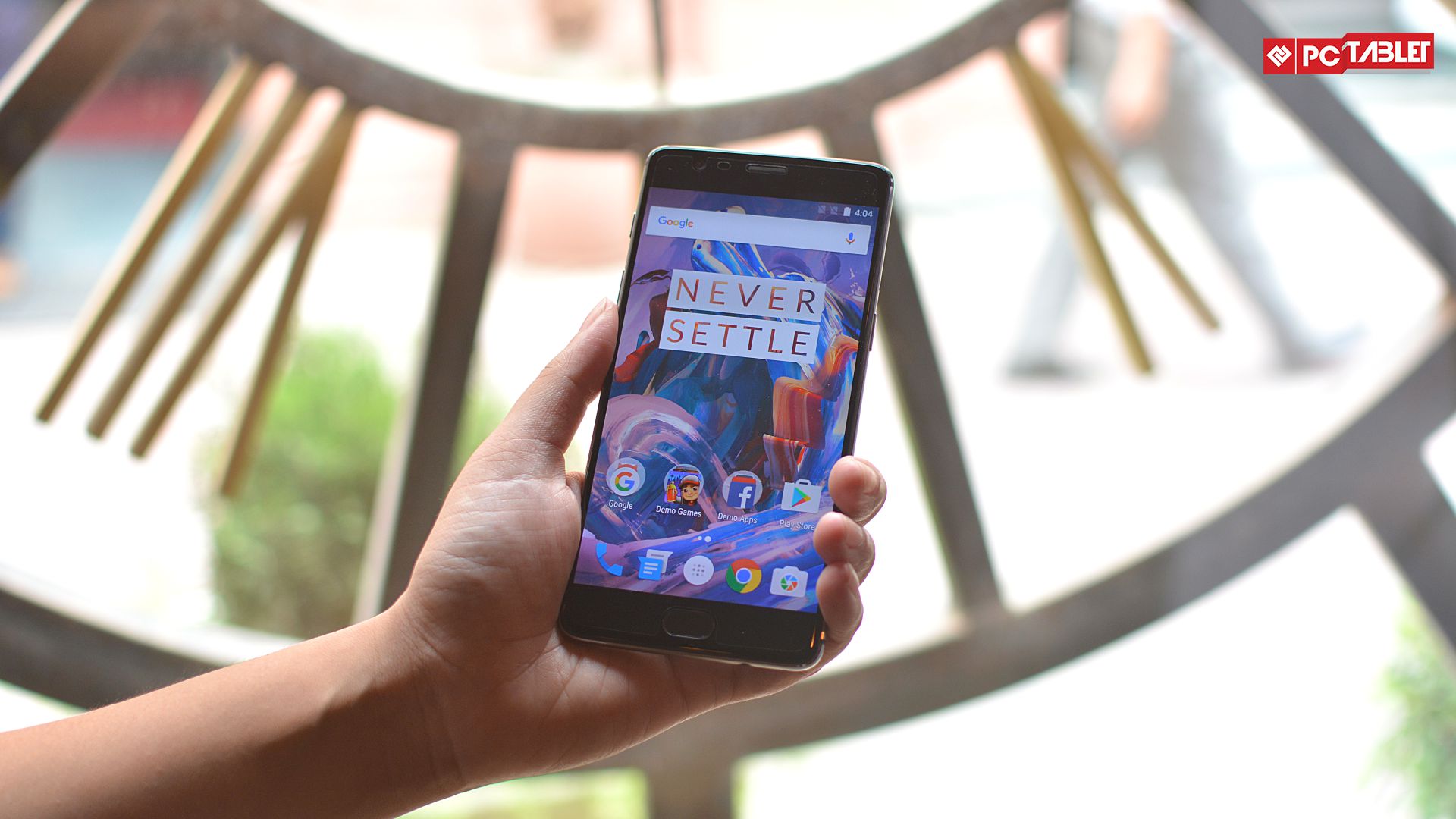 The OLED panel gives it high contrast and black levels. Now, sit like a boss after work or class at night in your room and enjoy a mini theater like experience. Don’t get disappointed by the single speaker grille, just yet. You will be blown away by the Dirac HD Sound Technology.

Overall, the display is quite pleasing to the eye, even with oversaturated colors and deep blacks (typical of AMOLED panels). Tolerance levels are also tight.

Tip for the movie buffs: use the cast feature for your smart TV, and enjoy a full HD viewing experience. Thank me later! 😉

Quick question: What does a two-dimensional (travel freaks and social media savages) youth demographic want in a phone besides good connectivity and compatibility to Tinder, of course? Camera-what else? With a 16MP rear camera, this one is a useful companion for a trip and for selfie sessions at parties or wherever the soul demands, you’ve got an 8MP front camera.

All that not enough? Well, it also has an OIS image stabilizer for the rear camera. So, if thou are out with the lads and the ladies on a road trip to Himachal or Lonavla or Vizag, thou shall not have to stop every time to click a good image. It has been said! 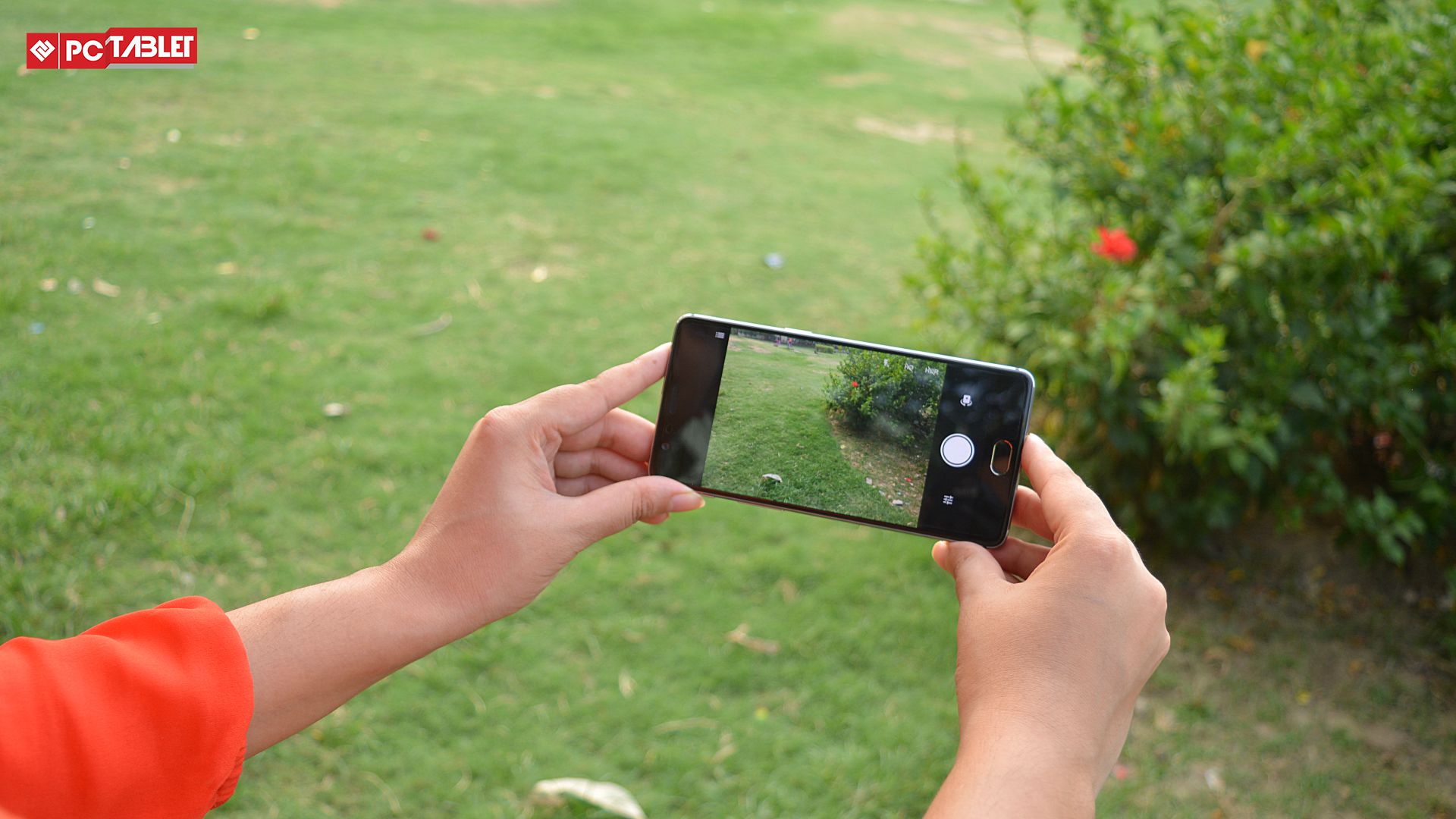 The large camera sensor helps with the resolution. The shutter speed is quite decent, even in HDR mode, as compared to Samsung Galaxy A7 or the LeEco LeMax 2. The colors caught by the camera are just about as good as they get. The auto-HDR helps with the clicks whenever needed, and it wouldn’t be such a bad idea to have it on at all times. Be it landscapes or otherwise, it does more than justice to its spec label. As complained by several others, I never had any blurred images, despite having a shaky pair of hands.

There are a few drawbacks of the camera, though. The accusations of over image processing haven’t dried up with the new flagship, and somewhat rightly so. Makes the images look a little tweaked, but I wouldn’t mind a little dimple in the chin unless it makes the picture look ugly.

There’s not much of a difference in the software. It runs on Android 6.0.1 with OxygenOS 3.1.2. The extra usability features include multiple customizable bits on the left screen. It has most frequently visited apps and an option to add a memo, widgets, and shortcuts to frequent contacts. The skin has been kept simple and clean; however, there are a few noteworthy tweaks. The Dark Mode turns the white bits in the apps and Settings areas black. It appears a bit gothy, but could actually help to improve battery life as the phone has an OLED screen. 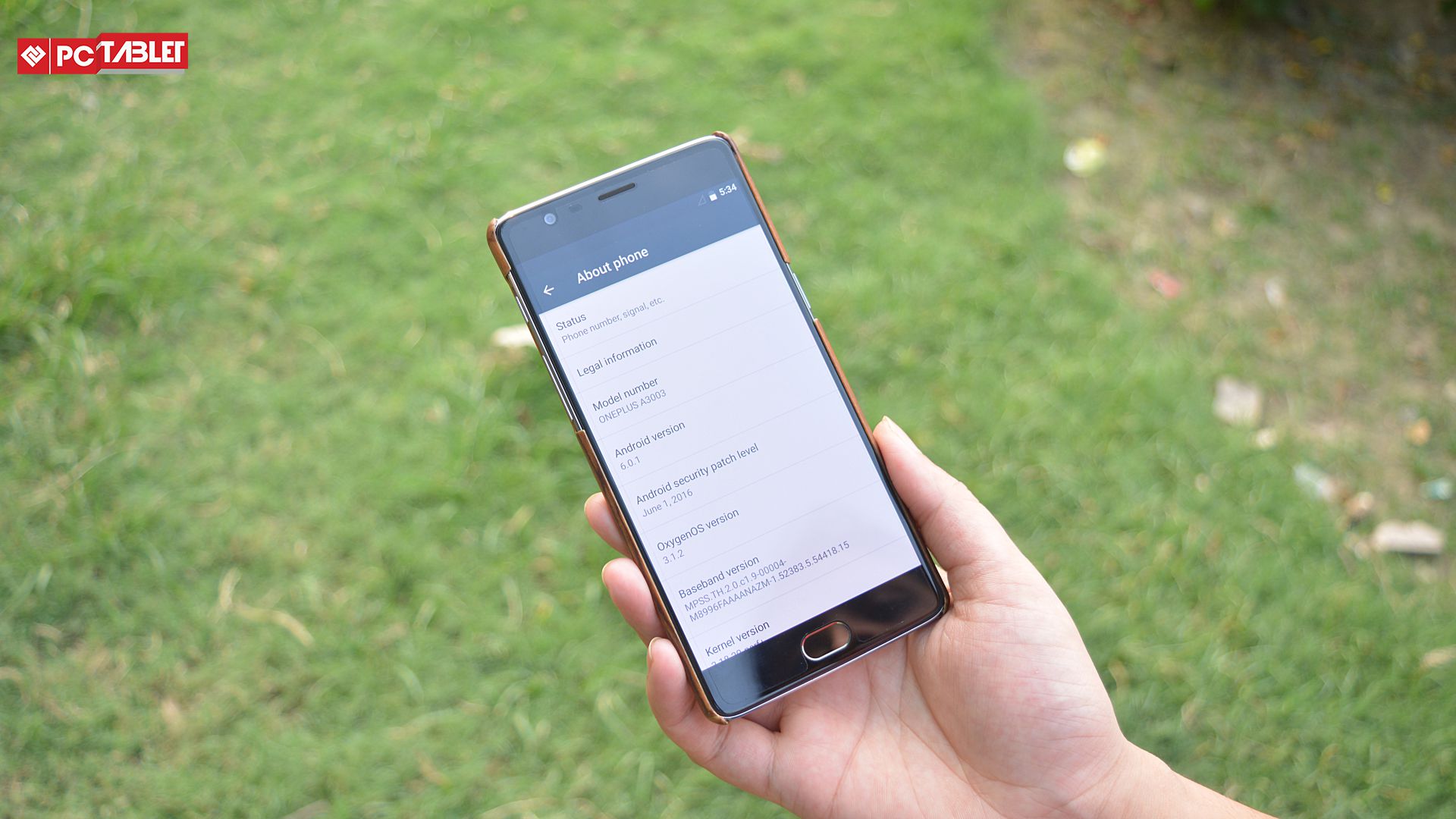 As mentioned earlier, the navigation is simple and convenient on the interface, and the smooth transition between pages makes it quick and less RAM consuming. The only problem I find is the icons (especially the camera and the gallery). It may be because of the display, but I can’t locate some of them with a quick glance in the app drawer. Perhaps the icons are too generic or too new for me.

That being said, I find it to be one of the least annoying OS’ out there. Extra customisation might make it of some value for a tech-nerd but would do nothing to improve user value, if not hamper it.

Besides the industry-wide issue of a generic performance among smartphones in a particular price bracket, there’s nothing worrisome about OnePlus 3. The phone is fairly quick and has no screen-changing display jargons to make things slow.

The spec-packed phone gives a good value for money with the latest Qualcomm Snapdragon 820 and an excellent quad-core CPU. There was no heating issue for as long as I used it. At two points, I had every app on the phone (20) on while playing ‘NFS No Limits’ and Dead Trigger, and faced no issues, be it heating or lags.

The rare 6GB RAM has much more to offer in this one. Although, I still wish they had made the storage expandable from 64GB but, that’s only my greed talking.

The Oxygen skin isn’t half as obnoxious as most of its counterparts. Good to know that they’ve kept it simple and not changed much from the normal Android. The only significant addition to Android on the skin is the ‘Shelf’. Sitting on the left of the home screen, the page is next to useless or unnecessary, seeing as how simple the navigation is on the phone.

On the AnTuTu Benchmark, OnePlus 3 hauled a massive 132156 rating. Okay.. what have we got next? Let’s see.

The phone has a dual-SIM 4G connectivity, and the receptors or antennas and SIM readers are up to the mark, as I had no problems with any of the calls that I made.

The FDD-Band 3 and TDD-Band 40, Wi-Fi a/b/g/n/ac, Bluetooth 4.2, and NFC are a standard top notch. I continued to use the Bluetooth with my earphones for music, for a total length of 13-14 hours (not at a stretch), before the phone consumed a total of 100% battery. Excellent! The USB Type-C port does little to increase the rate of transfer.

There is nothing exceptional with the 3000mAh battery, but the black color (a blasphemed deviant from the normal red) has been termed as the most disappointing aspect of the phone by many repairers.

As is the industry norm, the battery will last about a day. In our battery test, the phone drained 23% in twelve hours, which is excellent. 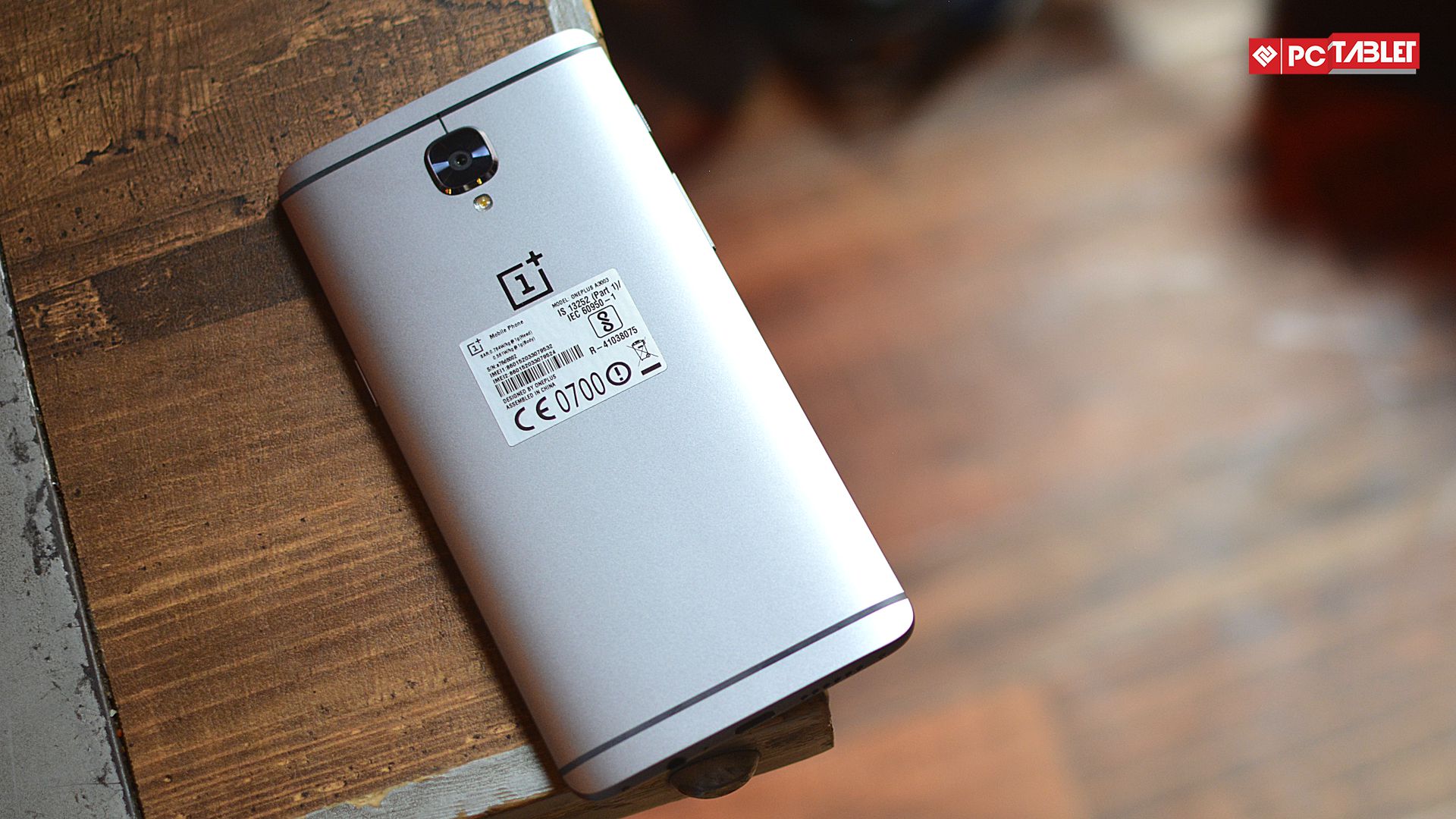 The best part here is the dash charging. When the phone is switched off, it takes about one hour to charge fully, and a little over two hours, when on standby. So to sum it up: long-lasting and quick-charging.

There’s nothing really to dislike about this one, especially at this price. It feels and packs expensive at a decent price. The 12-month free ‘Saavn’ subscription just helps. The little club of OnePlus users will continue to grow if they continue delivering like this. OnePlus is one of the best smartphones released this year, even at a price tag of Rs. 27,999.