According to reports, Reliance Jio will be officially launched in India on August 15 by introducing the much-awaited 4G services. However, ahead of official launch, a popular tech portal has revealed the base tariff charges. There were reports on the media circle that the company will offer 4G services at unbeatable prices. However, we are unable to view any such drastic cut in tariff charges as per the latest tariff sheet.

Even though Reliance Jio will offer a huge discount on data services soon after the launch, the base plan charges will remain equivalent to other leading operators in India.

Initially, the company is slated to charge 2p/sec or 1.20rs/min for voice calls for calls made from Jio mobile, other mobile operators, landline phones including landline services offered by Jio. While the ISD calls will be charged at 5p/sec, the company is touted to charge Re. 1 for every SMS message. As far as data is concerned, you will be required to 1p for every 10KB usage. 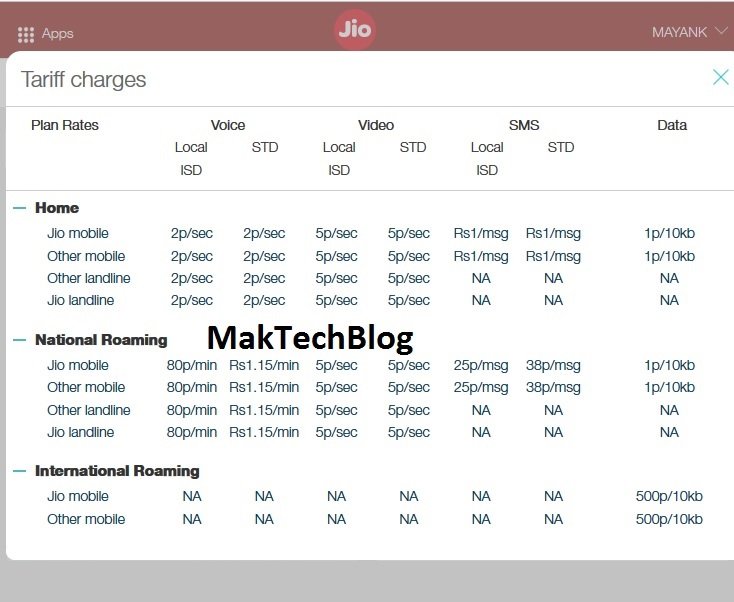 The tariff charges revealed by the tech portal showcases rates for home, national and international roaming charges of Reliance Jio base plan. Nowadays, video calling is assuming great importance with aggressive use of hem via Google+ and WhatsApp. You will have to pay 5p/sec in both home and national circle if you make use of video calling.

In the meantime, Reliance Jio has only disclosed the data charges under international roaming, which will be 500p per every 10KB of usage.

You should note that the above-mentioned charges are meant for the default packages of Reliance Jio. We expect Reliance to provide improved and competitive rates for both voice and data when the service gets launched commercially on the tentatively fixed date of August 15.